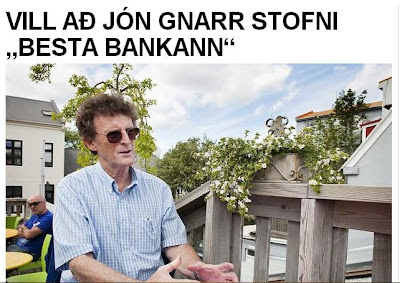 Here is a very rough translation of the above DV article from Iceland.
Icelandic to English translation
The U.S. documentary arbitrator Bill Still, who is famous for the movie The Money Masters, John, has sent letters you use in the city where he suggests that he found a bank, a bank owned by the population.
Still Bill came to this country recently and founded together with other organizations working group on economic improvements Islands (New e. Monetary Reform Working Group).

In a letter to Mayor writes that American would be the best City would create a bank, for the fun that could be named "Best Bank".

"The city puts its tax receipts into a bank. For example, we can say that there are 200 million krona per year. It is the amount that can be multiplied with 9 under international banking rules. If we use the principle of fractional reserve lending, which is in good standing with the IMF, the new Best Bank could loan out 1.8 billion krona. Best Bank could lend any person, for example borgarsjóði, with no interest - yes, it is right, no interest. This is totally legal. This is why North Dakota is the only state in the U.S. by Money In particular, no debt and the lowest unemployment in the country, "writes Bill Still.

Historic opportunity
"And it gets better and recover. Reykjavíkurborg on other assets. In accordance with the same international rules for banking, Best Bank could count all the city roads, bridges and buildings in its portfolio. The amount is high! Of course you would not want to lend out all that money or it would cause inflation, and the answer is that you would not lend nearly as much as you could, but imagine the number of people you could help with two billion Krona? Of course City could use the money to fix the economy in other respects as well as to keep taxes low during this difficult time.That's what makes North Dakota with his bank, "writes the man making a documentary that promises Best Bank would be successful.

"You have an historic opportunity to change the Bank's monetary policy. If you accept the best bank will follow the parliament. If the Icelandic nation manages to escape debt system IMF is trying now to slavery with Iceland, investment capital will flow from all over the world to Iceland. My wife and I would put our savings into the bank. Many other Americans would do the same. "

DV Bill Still spoke with recently. He says the root of all problems in financial systems today is too much debt.

Away with debt
"I recently traveled from Sweden and Germany and now I am here. It is very interesting to see that people of all nationalities seem to feel: our politicians do not respond to call voters and as soon as they reach power they give into the Yawning Void money and power and lose sight of the democratic reforms. We find that the city of Reykjavík choose the Best Party and a polar bear rather than the old rulers of the people have lost faith in. People complain about the exact same things in the U.S., "says Bill Still.

"This is absolutely incredible condition and worse than the U.S., we have a bad situation, but not as bad as you. But even though the situation is bad the good news is that there is a solution that can save you. The solution is for Iceland to give out their money without having to borrow money.No lands shall collect loans. I fix the bumper sticker (e. bumper sticker) with the Icelandic flag that says "Off with government debt. But then I actually got out that Icelanders do not use such stickers on their cars! It is the core of the solution. States should not be allowed to borrow and banks should not be able to lend more money than they should. It's that simple. "

Skuldlausir money solution
"What creates prosperity in countries that can create its own resources without indebtedness, it is the most important power of governments. The only downside to this is that governments have to manage cash levels so that inflation does not occur. If they succeed it will be prosperity in the State. Then do not have to pay interest on loans and countries are not subject to creditor powers of big banks.
Icelanders do not keep on borrowing. You can create your own resources. You can even pay your debts so, but you saved them with your own money, which has skuldlaust to travel, "says Bill Still.;