.."indeed, they were able to show that repeated exposure to the same stimuli (photographs of women or geometrical shapes) enhanced liking for these stimuli more when the stimuli were presented subliminally (i.e., for only 5 milliseconds) than when they were presented with conscious awareness (i.e. for 500 milliseconds)."
Lähettänyt Lars Osterman osoitteessa 01:50 1 kommentar:

'Czech president Vaclav Klaus, who is supported by the country's largest political party, called the Irish referendum vote a "victory of freedom and reason" and said "ratification cannot continue".

His view was echoed in the Czech senate. "Politicians have allowed the citizens to express their opinion only in a single EU country," Mr Klaus said. The resounding Irish no was a "victory of freedom and reason over artificial elitist projects and European bureaucracy," he said.'
Lähettänyt Lars Osterman osoitteessa 01:05 1 kommentar:

"Paul raised more than $34 million, much of it online, and had more than $4.7 million in hand at the end of April that he could use to fund Campaign for Liberty.

He also developed a large grass-roots following among those who backed his call for ending the war in Iraq and smaller government at home. He easily passed the 1 million-vote mark during the primaries, and in the final three contests on June 3 he finished second to McCain, with 22 percent of the vote in Montana, 17 percent in South Dakota, and 14 percent in New Mexico. His new book, "The Revolution: A Manifesto," zoomed to the top of bestseller lists.

Supporters, staging uprisings at state and county GOP conventions across the country, have pushed for a speaking role for Paul at the Republican National Convention in September in St. Paul.

Because that does not appear likely, Paul confirmed plans Thursday to hold a counter-rally at an arena in neighboring Minneapolis on Sept. 2, the second day of the GOP convention." 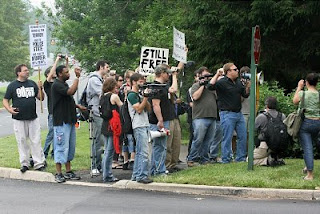 Jason Bermas is joined by author and lecturer G. Edward Griffin to discuss Bilderberg's agenda, international control of the Internet, and the plan for an Asian and a Eurasian Union.
Lähettänyt Lars Osterman osoitteessa 12:20 Inga kommentarer:

A conversation with Leuren Moret, Expert Witness with the Tokyo Trubunal for War Crimes in Afghanistan and Expert Witness on depleted uranium (DU) for a member of the Canadian Parliament, on HAARP, MKULTRA, Cointelpro & Mind Control, including the application of these combined technologies on Canadian citizen.

A prominent lawyer lays out a compelling case in THE PROSECUTION OF GEORGE W. BUSH FOR MURDER. Staggering evidence is collected against the president in a startling new book.
Lähettänyt Lars Osterman osoitteessa 21:56 Inga kommentarer: